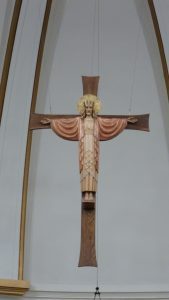 Do we have a “resurrexifix” hanging above the altar at our Paulding campus? (See accompanying photo.) As we had various guests come to our campus to visit our Holy Door during the Jubilee Year of Mercy, and even during our most recent celebration of Divine Mercy Sunday, I had guests ask me this question: “Why do we have a “resurrexifix” hanging above our altar at Paulding?

By “resurrexifix”,  I mean something quite different from a crucifix. “Crucifix” is a word that roughly combines the Latin words for “cross” and “fixed”, which make a crucifix a cross with Jesus’ body fixed to it. In other words, Jesus is nailed to the cross, when you have a proper crucifix. A “resurrexifix”, on the other hand, is a cross that has Jesus on it, but his hands and feet are no longer nailed to the cross, and it looks as if he is jumping off of the cross, or he has risen from it – with hands and feet clearly freed from their nail-bound position against the wood of the cross. So, back to the question, “Do we have a resurrexifix hanging above the altar at our Paulding campus?

The parish guests that approached me were people familiar with the General Instruction to the Roman Missal (the book I use during Mass with all the prayers and instructions), which says the following in paragraph #308:

Either on the altar or near it, there is to be a cross, with the figure of Christ crucified upon it, a cross clearly visible to the assembled people. It is desirable that such a cross should remain near the altar even outside of liturgical celebrations, so as to call to mind for the faithful the  the saving Passion of the Lord.

I’m not sure exactly why, but in the years following upon the Second Vatican Council, there was a bit of a fad with church decoration, whereby people started using “resurrexifixes” rather than crucifixes for the liturgy.  So the newest version of the General Instruction had to specify that the cross must include the corpus of Jesus crucified. (The old version of the General Instruction was not that specific.) At our Paulding campus, in fact, the processional crucifix really was not a crucifix when I first arrived. The body of Jesus was placed, such that his hands were not actually fixed to the wood. A generous parishioner fixed this, soon after I arrived, by moving the body of Jesus on the processional cross, so that it looked like the hands were actually fixed to the wood.

Why do I think it is healthy for the soul over and over again to look at a crucifix? It helps us constantly to deal with the mystery of God’s amazing love for us, whereby he actually sacrificed himself on the cross. Fixing our eyes on a crucifix is to fix our eyes on Calvary, which is to train our eyes on the greatest act of love the world has ever known.

But clothing him as a king is not the same as taking his hands off of the wood and showing him jumping off the cross, as if resurrected. Clothing him as a king – even while he is still crucified – is a way that artists and sculptors show us that Jesus Christ remained the Divine King, even while he was being crucified. He was, in fact reigning over heaven and earth, even while he was on the cross. He especially remained the “King of Love” while he was crucified. So the artist who created our crucifix which hangs above the altar at Paulding put royal clothes on Jesus – even a crown – all the while leaving his hands and feet nailed to the cross.

Of course, we know from Scripture that Jesus was stripped of his garments before he was crucified. So, historically speaking, he did not have a physical crown on his head, nor was he wearing royal garments as he hung upon the cross. But, he definitely was a king all the while he was crucified, and he reigned over life. The guards mocked his kingship. A sign over his head mocked his kingship. But he still remained a king – the King of kings. He reigned over full and free divine-human love on the cross. So we allow artistic license to help us remember this, when we look upon a crucified, royal Jesus, such as we have hanging above our altar at Paulding.

Does this mean that if somebody has a “resurrexifix” at home, they ought to get rid of it? The rubric of the General Instruction is meant to apply to our public liturgy. Is not meant to be a statement that forbids anybody from looking upon a “resurrexifix” in their own homes. You are therefore certainly free prudently and prayerfully to discern what is best in your home. I would certainly make sure that you have at least one major crucifix in your home, however, given how healthy that is for the soul.

Have a blessed week!