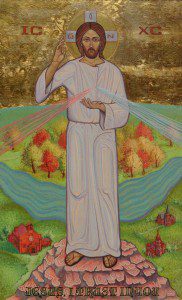 On July 1, 2008 the three Paulding County Ohio Parishes of St. Mary’s, Antwerp, St. Joseph’s, Paulding and St. John the Baptist, Payne were suppressed and Divine Mercy Catholic Parish of Paulding County was established. After learning that the official name of Divine Mercy had been approved by Most Rev. Leonard Blair, Bishop of Toledo, for the establishment of the new parish, there was discussion on how to best bring about the change. In the spirit of unity among the parishes and following the pope’s call for unity among Christians, it was decided that a most appropriate image of the Divine Mercy of Our Lord would be an icon, following the Christian icon style of the East.

An icon is a portrayal of Christ’s image and its imprint on the world. He sees and loves us and He wants us to see Him. The icon helps us to open our range of spiritual vision and leads us to deeper contemplation and mystical contact with our Creator. Iconography is a labor of love. In representing Christ in an icon, the iconographer prepares for his work with prayer, penance and fasting and this remains an essential part of his life while he is at work. Through the efforts of Deacon Steven Drennan, iconographer Oleh Skoropadsky was commissioned to create an image of The Divine Mercy that would embody the history and the vision for our newly formed parish. Oleh, a Ukrainian by birth, had traveled and studied iconography extensively in Eastern Europe.

Mr. Skoropadsky did his best to capture the feel and openness of Paulding County by painting in the background of the image of Our Lord Jesus, the Maumee River which flows through our county, along with the fields and sparse forest blocks in the flat lands. However, most important for the occasion of the combining of the parishes, Oleh painted in the landscape, images of the actual church buildings that are now united as one parish, Divine Mercy. Above the landscape is painted traditional gold embossing with vine branches so common in Eastern icons. The icon was painted in the city of Lviv, Ukraine in June of 2008 and took approximately 4 weeks to complete. The frame for the icon was chosen by Mr. Skoropadsky. Upon its arrival here in Paulding County, the Divine Mercy icon was carried during the processional ceremonies and the blessing of the newly established parish. The original icon is displayed at Divine Mercy, Paulding and identical copies of the icon hang at the other Divine Mercy Parish locations in Antwerp and Payne. 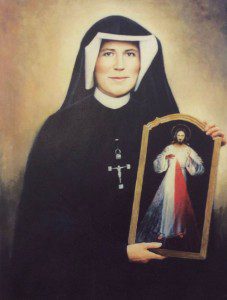 Helen Kowalska was born on August 25, 1905 in Glogowiec, Poland, the third of 10 children. At the age of seven she had already felt the first stirrings of a religious vocation. She entered the Congregation of the Sisters of Our Lady of Mercy on August 1, 1925 and took the name Sr. Maria Faustina of the Most Blessed Sacrament. Externally nothing revealed her rich mystical interior life. The process of contemplating and getting to know the mystery of God’s mercy helped develop within Sr. Faustina the attitude of child-like trust in God as well as mercy toward her neighbors. The Lord chose Sr. Maria Faustina as the Apostle and “Secretary” of His Mercy, so that she could tell the world about His great Message, which Sr. Faustina recorded in a diary she titled “Divine Mercy in My Soul”. In 1931, our Lord appeared to St. Faustina in a vision. He asked her to paint an image according to the pattern you see, with the signature “Jesus, I trust in You”. This image is now commonly known as the “Divine Mercy Image”. Sr. Maria Faustina died on October 5, 1938 at the age of 33. Pope John Paul II (now St. John Paul II) canonized Sr. Maria Faustina on April 30, 2000, making her the first Saint of the new century. 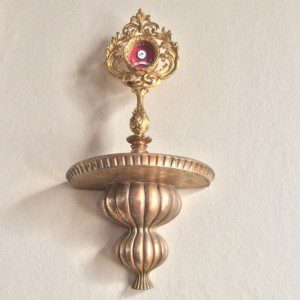 We are blessed to have at Divine Mercy Parish a first class relic of St. Faustina. The relic was obtained from the Congregation of Sisters of Our Lady of Mercy in Rome after permission was granted from their Mother house in Krakow, Poland. The 19th century gilded bronze reliquary was obtained from a company based in France. The inside casing for the relic was sent to Rome so that St. Faustina’s relic could be properly incased and returned to us for seating in the reliquary.