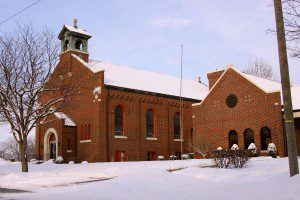 Around the year 1897, Father F. Rupert of Antwerp visited the Catholics of the Paulding area.  His mission was to induce the Catholics of Paulding to attend Mass at either Antwerp or Cecil. Some years later a mission parish was established in Latty, a few miles south of Paulding so the Catholics of Paulding often walked to Latty to attend Mass.  In 1893 Reverend J.P.McCloskey was delegated to form a parish in Paulding under the patronage of St. Joseph.  Since there was no church or hall the fledgling parish met in the homes of various parish members. They soon grew to a large enough community that they were able to rest a hall, and in the meantime a site for a new church had been acquired at the north end of Williams Street.  Ground was broken for the new church in the spring of 1894.  From 1894 thru 1901 the county and parish continued to grow.  August 25, 1901 saw the appointment of St. Joseph’s first resident pastor, Fr. S. J. Cappe.During Father Cappe’s pastorate a new location for the church and rectory were selected at St. Joseph’s present location on North Main Street.  The contract for moving the church building was let on November 5, 1901 but because of a dispute between
the contracting parties and the movers the church stood in the middle of the street until January 13, 1902.  The first Mass at the new location was celebrated on the Feast of St. Joseph on March 19, 1903.Between 1903 and 1925 three major events occurred; 1) lightening struck the Latty church, and it was destroyed by fire;
the Latty congregation was moved to St. Joseph’s; 2) in 1918 a parochial school was established and staffed by the Sisters of St. Francis of Tiffin; the school had to close in 1930 because of financial restraints brought about by the Great  Depression; 3) on December 13, 1925 at 8:30 on Sunday morning fire was discovered in the frame building of the old St. Joseph’s Church.  In two hours the entire church was lost. In a little over a year a new church was build at a cost of $53, 060.95. The first Mass was celebrated in the present church on Christmas Eve 1926.

At the end of 2007, St. Joseph’s was a vital parish with over 1,200 registered members, an Education Center, prayer garden, rectory, Garden House and a newly renovated church.  From humble beginnings the Catholic faith has grown in this area of the once Black Swamp through the faith of the people and the grace of God. July 1, 2008 the parish was suppressed and Divine Mercy Catholic Parish of Paulding County was established.  The history of this new parish is just beginning to be written, but the faith of the Catholic people remains.